‘The day will come, and perhaps is not far distant, when the European observer will look round to see the globe circled with a continuous zone of the black and yellow races, no longer too weak for aggression or under tutelage, but independent, or practically so, in government, monopolising the trade of their own regions, and circumscribing the industry of the Europeans; when Chinamen and the natives of Hindustan, the states of Central and South America … are represented by fleets in the European seas, invited to international conferences and welcomed as allies in quarrels of the civilised world. The citizens of these countries will then be taken up into the social relations of the white races, will throng the English turf or the salons of Paris, and will be admitted to inter-marriage. It is idle to say that if all this should come to pass our pride of place will not be humiliated … We shall wake to find ourselves elbowed and hustled, and perhaps even thrust aside by peoples whom we looked down upon as servile and thought of as bound always to minister to our needs. The solitary consolation will be that the changes have been inevitable.’

It was the above paragraph that Edmund Barton, Australia’s first prime minister, read to the House of Representatives, in the debates about the first Acts of the policy now known as the White Australia Policy. The spectre of mass migration of lesser races haunted the days and dreams of Australians, so much so, that upon federation, the one policy that had been insisted upon, above all other policies was a policy to prevent non whites, specifically Chinese and other Orientals from migrating to Australia. 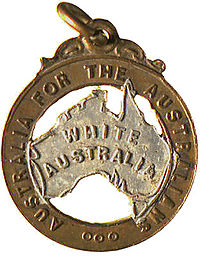 The Labor Party, once a party that actually looked after its constituents, instead of kowtowing to the ‘others’, was at the forefront of the White Australia Policy, it was their support for Edmund Barton’s party that led to the immediate passage of these first Acts of the WAP, and the deportation of some tens of thousands of Pacific Islanders, Chinese and other Asian peoples resident in Australia.

Now according to the multicults, Australia should have fallen apart, as we all know that there are some jobs, Australians just won’t do! Well, funny things happen in the real world, the exclusion of what was basically slave labour from the Pacific, led to a situation where the Sugar plantations in Queensland had to actually pay a decent wage to white men, to get them to come and work the fields, which they did. Labour throughout Australia benefited from the WAP, wages went up and stayed up, the country retained its English character, and so divisions were minimised.

The White Australia Policy was a great success, and inevitably the powers that be worked their way to destroying this success.

Even when the policy was first being formulated, the elites in London opposed it, it was “contrary to the general conceptions of equality which have ever been the guiding principle of British rule throughout the Empire”, they sound very much the same as our politicos today!

‘With the passage of the Pacific Islands Labourers Act in 1901, the Commonwealth of Australia was inaugurated in an act of racial expulsion. Australians would do what the United States – with a population of eight million Blacks – could not. For Deakin and his fellow members of parliament, the sovereignty of the people meant the capacity to protect their racial character. But when they spoke of the necessity of ‘self-protection’, they spoke not as ‘Anglo-Saxons’, but as ‘white men’. Although neither the Pacific Islands Labourers Act nor the Immigration Restriction Act referred to race by name, their intention was clear enough. ‘The two things go hand in hand’, advised Attorney-General Deakin. They were ‘the necessary complement of a single policy – the policy of securing a “White Australia”.’

It was done, it has been done! With all of our problems, there are some who state that we are stuck with the consequences of the disastrous policies of the last sixty years or so, and yes, in some ways we are. It will be difficult, but with the example of Australia in 1901-08 we can see that it is not impossible, in less than a decade, they cleared Queensland and the north of Australia of non whites, peaceably, decently and thoroughly.

I am sure that we would not be able to do so completely peaceably, but after the initial riots and a few examples of sternness shown toward those rioters, I am sure that we could begin the expulsion of the aliens from our shores, within a decade, maybe less we could have our nations back, and in a decade more we could have seen the healing effect of being left alone. The scars will remain, but we could once again be free. Multiculturalism has failed, and it has been seen to have failed, let us put forward options, suggestions for what we could do to sort this problem out, and how to extricate ourselves from the degenerate stew into which we have been placed.

One thought on “The example of the White Australia Policy.”